This figure was actually from a few weeks ago, I totally forgot about it. This was a long pose - 3 hours. I did this using charcoal, my finger, a napkin, and a kneaded eraser. Another "before" piece (see previous post). 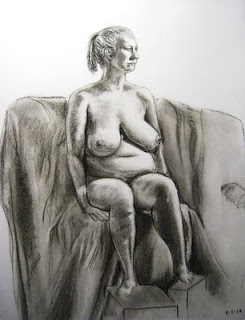 I will be taking a week-long intensive drawing course at TSA next week, I can't wait!! Here are some figure drawings I did last Sunday, it will be cool to see how my style changes after the class... 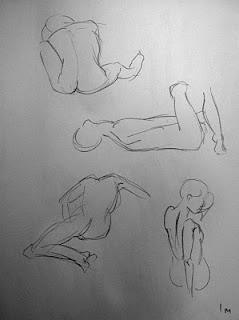 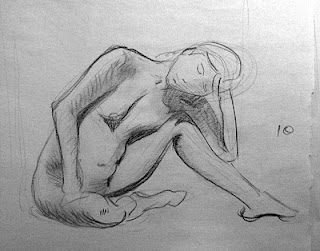 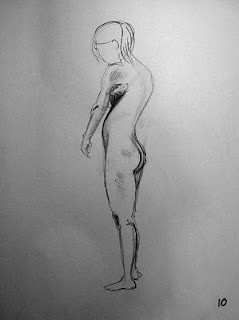 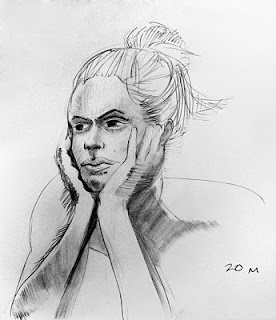 Posted by PizawL at 4:16 PM No comments:

For my very pretty and wonderful girlfriend's birthday present, I wanted to make a painting of her favorite animal, the Green Sea Turtle. I was also eager to attempt a painting using some of the techniques and knowledge I have gained over the past year in BMC. While the finished product was made with traditional media, I used the assistance of digital art programs throughout the process. 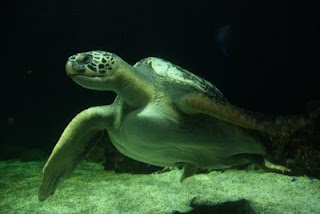 I started this project with some keen reference photos taken by my friend Duncan at the Vancouver Aquarium. He had taken several excellent shots, so I had to narrow it down to a few I thought would best capture the turtle in action. I didn't want to just download a picture off the internet for this piece; since it was to be a gift I wanted it to have a little extra uniqueness to it. 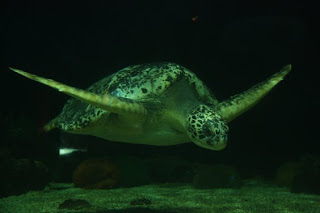 At first I strongly considered using ^this^ picture, because I really liked dynamic swooping pose. 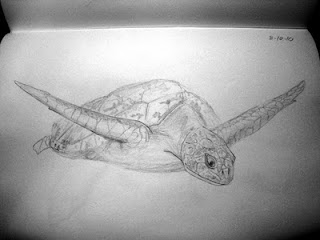 So I made a sketch of the photos I thought were the most promising for what I wanted to accomplish. 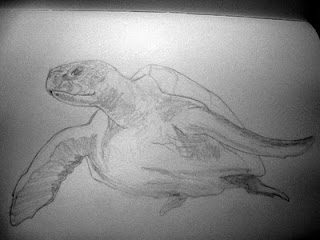 This helped me to get a sense of form, lighting and various textures. (I also did a few sketches I have not posted here.) I think it was beneficial to study this species from several different angles, so as to sketch out certain details that are only slightly visible on alternate photos. 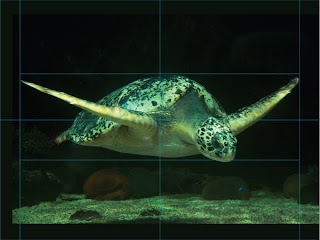 After a few adjustments in Photoshop to make the subject more focused, I put the reference photos in Illustrator to take some preliminary measurements, and I'm glad I did, it really helped me to see that the "swooping" pose I liked at first was too narrow to make good use of the canvas I was working on. It also would have meant I would have had to squeeze a lot of detail into a very tight space. 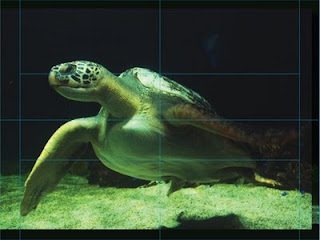 I went with the above photo instead, which had excellent areas of precise detail such as the head, neck, and right fin. The lighting also strongly highlighted the important features I wanted to focus on. 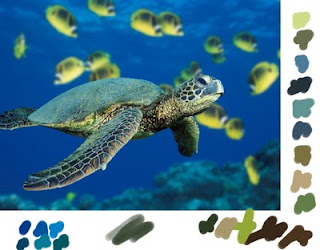 I was cognizant of the fact that the reference photos taken at the Aquarium were taken in a dark room and had a strong yellowish light, and I knew that I wanted to place the subject in my piece in a strong blue background. So I googled a few more reference photos of Sea Turtles in their natural habitat, and used the eyedropper tool in PS to get a sense of the palette I wanted to go for. 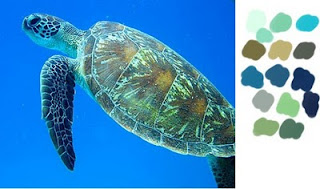 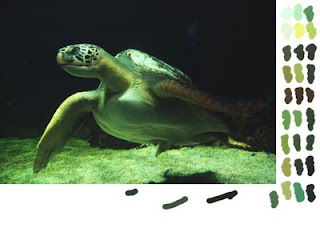 I also used the eyedropper tool on the reference photo to better understand the color relationships. 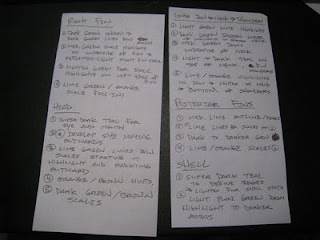 Before beginning the actual painting, I planned out a rough step-by-step process for how I thought I should lay down the colors, keeping in mind the palette I had established above, and trying to anticipate how I could break the turtle into various parts. I wanted to make sure that I used the exact same hues I mixed for one area also in another, so that the finished piece would not look like a collage, but all of the parts I separated mentally would still be visually cohesive. 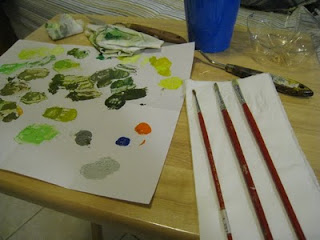 Here is my mixing area. I primarily used these three brushes: #2 round, #2 filbert and a #2 red sable. The background was done with a #8 broad and #4 filbert (not shown). 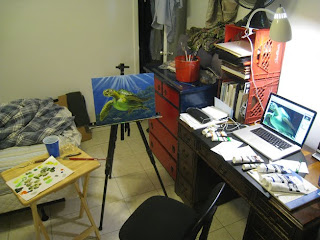 And my workstation, with Photoshop close at hand for assistance.... 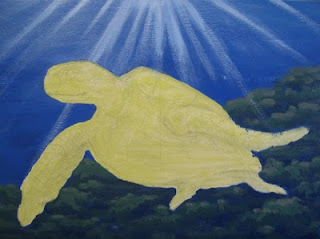 I started out with a pencil sketch on the canvas (sorry forgot to photograph!), this was actually the most important step, because I worked out all the proportions, tones and minute details right away. The reference sketches and layout planning took about 30 minutes, and the pencil sketch on the canvas took an hour. After that I used a trick I learned from a Boris Vallejo book, I painted over the pencil sketch with a watered-down base coat of paint, that still allows the sketch to show through. Then I went to work on the background, knowing that I should paint from back to front. I started with a gradient of blue for the ocean water, from light blue at the top where sunlight penetrates to darker blue at the bottom, I then painted the coral reef, and finally the beams of sunlight. 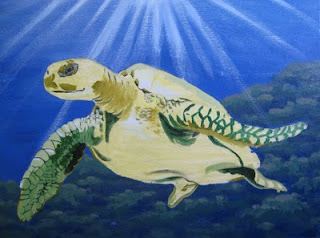 With the background established, I went to work laying down colors I knew would be cut back to skinny lines. This is one of my favorite features of acrylic paint. I took extra care to get very detailed on the eye, because I wanted the head to be an area of focus with high contrast. 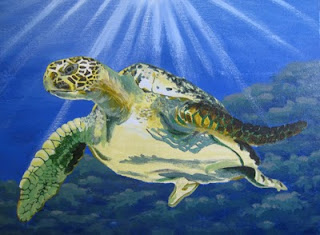 I worked mostly from left to right, spending the most amount of time on the head and fin, which were done completely with the fine #2 red sable brush. My color palette was based on variations of green, mixing Phthalocyanine Green with Ultramarine Blue and Burnt Umber for darker areas and Cadmium Yellow Medium with Light Green Permanent and Titanium White for lighter areas. I also added some Vivid Red Orange to the later mix for some of the olivey-lime shades. In the final phase I also used some conservative highlights of the orange to harmonize the color scheme and really pop the turtle out. 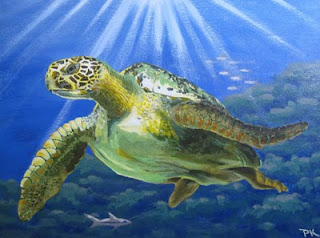 I set a personal time-limit for myself on this piece, I wanted it done in 20 hrs. I ended up getting it done in 16 hours total. I could have found things to play with for another few hours, but I reached a point where it just felt done to me, so I stopped. I hope you enjoyed this little recap, now, on to the next!
Posted by PizawL at 12:18 PM 3 comments:

PizawL
Savory smells of ingredients wafting from the kitchen as the chef goes to work... Originally from Chicago, I am a graduate of the Biomedical Communications at University of Toronto. I am constantly seeking to improve my skills, so critiques are always welcome.